Before I roll straight into features, I wanted to give a huge shout-out to Michael Genson on GitHub. He had a substantial impact on this release and nailed down a lot of the cool features that a lot of folks out there were looking forward to.

I had initially tried prototyping a cook-mode for Mealie that would bring focus to the Ingredients and Steps sections of the recipe instead. That way when you’re cooking you can see only what you need. The initial approach navigated to another page entirely and walk through a stepper. Thanks to @miroito a lot of that has been streamlined into the new Cook Mode that. Now the excess details are hidden and only the ingredients (linked to steps) and the steps themselves are viewable. Custom scaling has now been implemented thanks to some work by @Bentipa. It supports both whole and fractional numbers, and it’s now possible to set the scaling of a recipe to a custom value. 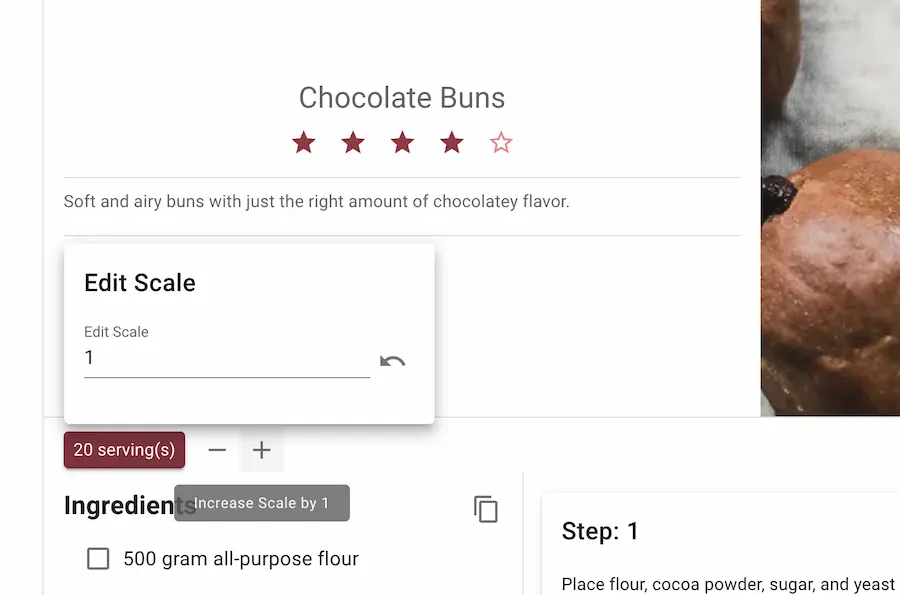 The user favorites page is now live! This is a great feature to have for users who want to keep track of their favorite recipes and browse them later.

After a slew of PRs to fix some of the underlying issues that was holding back our ability to sort recipes on the frontend we’ve finally got a place where it’s not only on par with the v0.5.x release, but it’s even better!

We now have a few different options available to sort recipes on the frontend, including Alphabetical, Created At, Updated At, and Rating. These can all be set to either ascending or descending.

After taking the month of July mostly off from the project I’m back and refocused on getting the project ready for a release candidate. I really want to get a version of Mealie that’s a solid release candidate out the door before the first week of September. As such I’ll be making some adjustments to the GitHub milestones and moving some features off of the RC-1 timeline and onto the Post-Release-1 timeline.

While it’s discouraging to say that I’m not going to get all of the features I was hoping for into the release candidate, I think that the core set of features we’ve already got into the project is enough to make a good start for v1. In the next month you’ll see me mostly working on security patches, bug fixes, and wrapping up some of the features that are half-way complete.

If you’re interested in contributing I highly encourage you to join the discord and get involved in the community of developers working on the project, and just because I’m not focused on shipping new features, doesn’t mean you can’t!